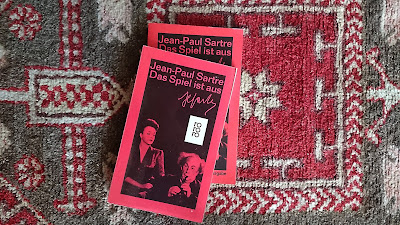 Two copies of the same edition of a book were lying on the carpet on the floor. "Les jeux sont faits".

"Les jeux sont faits" is the title of a screenplay by Jean-Paul Sartre and translates literally as "The Plays are Made", an idiomatic French expression used mainly in casino gambling meaning the bets have been placed. The English translation made in 1948 was published as "The Chips are Down". Title and plot both sound quite deterministic.

"Das Spiel ist aus", the German translation of the title means literally "The Game is Over". Thus the short time span between ending of the bets and the ball loosing it momentum and falling into the pocket of the wheel, saturated with expectations, hope, fear, desire, doubts, stress, greed, anxiety, adrenalin, sweat and prayers, as our whole life itself, is cast out. If we accept the parallel existence of the both translations and let them complement each other, the game is over before the final outcome of the game, at ending of the bets. Not only one has no influence on the future,  but also on the present because it is now, but a subset of the past.

“Life is a game” is a common verbal discharge taken for granted. It is, as far as we engage in conflicts, follow rules, make decisions and choices, manage resources, pursuit goals, and often gamble. That sounds more like existentialism. But if life is a game, and the game is over, is life over when the bets are placed? What is the time span between the bets being placed and defining the outcome of the game, a non-game, a non-life? A moment saturated with expectations, hope, fear, desire, doubts, stress, greed, anxiety, adrenalin, sweat and prayers. And who is placing the bets?

"Les jeux sont faits" can also be translated as the “the die is cast”. And to partially quote Albert Einstein's letter to Max Born from 1926: “The theory says a lot, but does not really bring us any closer to the secret of the "old one." I, at any rate, am convinced that He does not throw dice.” Does the same act, throwing dice, serve to describe exactly the opposite notion or somebody is throwing the dice for Him?

Alea iacta est (Latin "The die is cast") is a phrase attributed to Julius Caesar and still used to mean that events have passed a point of no return, that something, whatever it is, will inevitably happen, says Wikipedia.

Something, whatever it is, is inevitable, life is a game and the plays are made.
Posted by veroniKATZEkova at 4:32 PM