From landscape to cityscape. From two players to a single player, from 3x3 to 1x5 and 2x4, from a human to an animal.


Rock art is placed on natural rock surfaces and can be considered a form of landscape art. Common subject in rock art is depiction of game and hunting scenes. In the course of time our evolution replaced the natural surroundings and rock surfaces with cityscapes and building walls. Game evolved as well. From game animal to a game, from a game to a CHAlleNGED GAME. So did human being, to a game animal.

On the documentary photos below are some evidences. These are some peculiar versions of the popular tic-tac-toe game I encountered in 2012 in the city of Yerevan, Armenia, that offer food for though to ludologists and game connoisseurs what kind of game animal expressed itself and what is the game played. 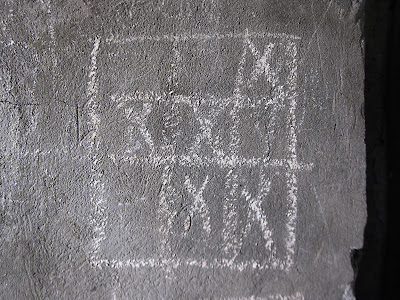 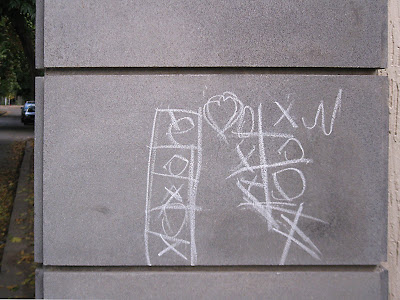 The first example was teasing me daily as it was on my way from the school I was living in to the bus stop in a suburb in Yerevan called (unofficially, but nobody knew any other name for it) Bangladesh. Simple chalk drawing on a building wall, extremely resembling a tic-tac-toe game but only with one player, the player “X”. “X” always starts in tic-tac-toe, so in general has bigger chances to win. But this one stopped and didn't win. Win against oneself? Is this losing?
To my regret I was unable to decipher the mysterious constellations and the message from the free thinker on the second picture. It reminded me a bit to my One-row-Tic-tac-toe ( http://challengedgames.blogspot.co.at/2014/01/one-row-tic-tac-toe.html ), but this didn't take me further. Two intersecting stylised hearts can be isolated between the two games... this just leads me to the next post.