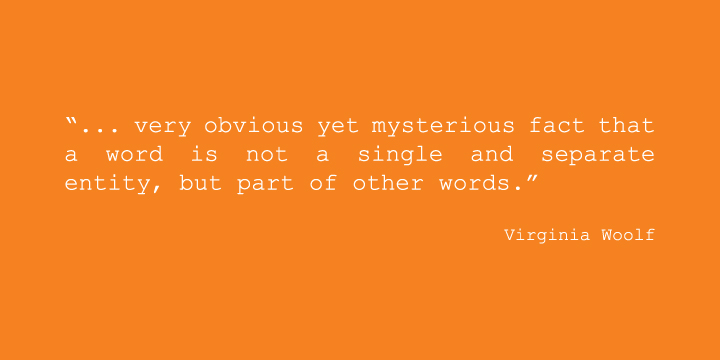 Concept and props by Veronika Tzekova

“games are a special form of liberating education, since they heighten awareness of the fact that formal systems are based on changeable axioms and that conceptual operations have a game-like nature.”
Ivan Ilich

The Tummelplatz2 in Graz was newly designed through its usage. The place was appropriated and turned into a big game-field for the simplest strategy game Tic-tac-toe (German: Drei gewinnt). The props for the appropriation were the people playing and the Street Tic-tac-toe, an author's game-sets, designed to be played on tiles covered surfaces using the grid, which they create. 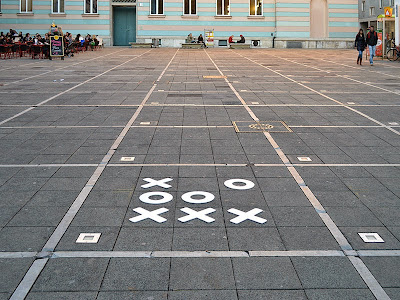 iGraz it is not particularly about games and playing. It offers a different frame of reference and questions modes of behaviour in public space, notions of safety, sharing and freedom in public space. It is about rethinking public space and our role, attitude and relation to it and from here to all agencies involved in its construction, government and policies. Games are perceived as leisure activities and please do not be mislead by this. Here the game and its game board/grid are employed as metaphor for life and representation of systems, society and its members.

Tic-tac-toe is generally perceived as the simplest strategy game. A strategy game is a game in which the players' uncoerced, and often autonomous decision-making skills have a high significance in determining the outcome. Almost all strategy games require internal decision tree style thinking, and typically very high situational awareness.

Tummelplatz offers opulence of visually well defined grids and I see it as constellation of multiple game fields waiting to be populated. iGRAZ aims to turn physical public space from nature morte to nature vivant. The game set I use becomes a simple and universal space rethinking and reuse tool. It challenges to change all.

It took its natural course and people played as long as they wanted. It was small, beautiful and international.

1„igra“ in most of the Slavic languages means “game”. The “i” before “Graz” also borrows the meaning where 'i' stands for "individuality" and "innovation".

2Interesting coincidence is that Google translates “der Tummelplatz” as “the playground” 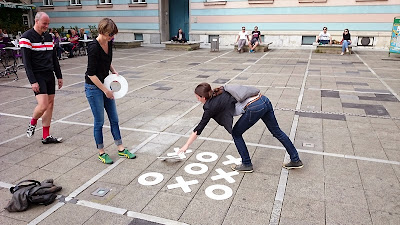 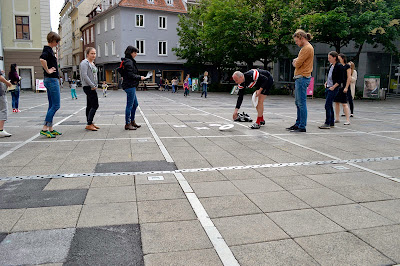 Posted by veroniKATZEkova at 9:03 AM