On the multiplicity in the simplicity, and the graphic appeal of the simplest strategy game

On the multiplicity in the simplicity,  and the graphic appeal of the simplest strategy game

Isolating symbols and trying to decipher the abnormal tic-tac-toes from Yerevan, reminded me that I had encountered symbiosis between stylised hearts and tic-tac-toe games before. Since I first came to Graz in 2012, I keep coming upon a graffiti “LOVE WINS” accompanied with a tic-tac-toe game where “O” is replaced by a stylised heart and wins.

I guess the main reason that I am so attracted to tic-tac-toe is the multiplicity in the simplicity of its symbols and graphics. The “X” and the “O” carry symbolical meanings as well. For example, “kisses and hugs” (XOXO) acronym. Cross in a circle, or the sun cross: ⴲ, is the astronomical symbol of the planet Earth. Cross and circle also form the sign of Venus: ♀ , etc.

The “X” also also can derive from “O”, marking two perpendicular diameters, as we see in the symbol of the Earth where it represents the equator and a meridian.

The “X” can be also constructed from two semi-circles or semi-ellipses. Actually that’s how I was thaught in school to write the letter “X”: 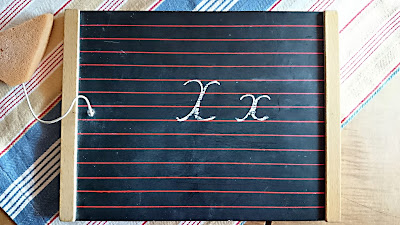 I also used this method in the design of some of my tic-tac-toe games made of leftover cardboard tubes.

And what more simple, clear and immediate way to visualise „a win“ than sketch of a win in tic-tac-toe game?

Posted by veroniKATZEkova at 4:28 PM